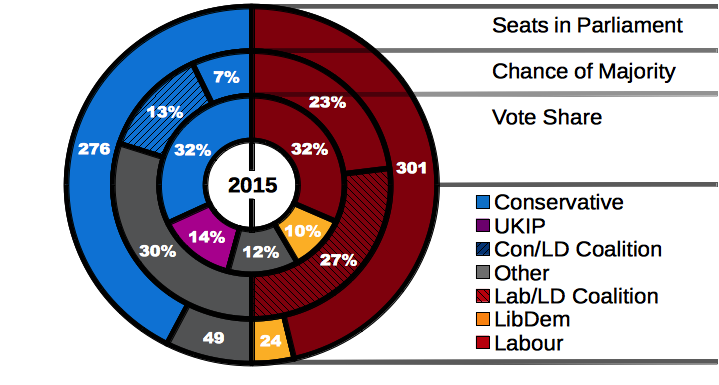 This week's graph shows a fine balanced seat prediction, with a Labour being just on the cusp of being able to form a bare majority coalition. However, this exact seat count occurs in none of the simulated elections. It's an abstraction taken from the average seat count across all those simulations. That is to say it's almost certainly wrong, but it gives you an idea of what neighbourhood the seat count will be in or near.


To explain why this is so, I'd like you to imagine a statistician has entered an archery contest. There's a target some distance away, with three big circular bands of colours. Green, yellow and red for the bullseye. The statistician sends off a volley of arrows in the direction of the target, they all land in a circle in the yellow band. "I must be winning!" the statistician declares, "I've hit the bullseye, on average!".

"The Average" result is not the same as the likely result. And that's why it's much more important to look at the chances generated. The chance of the exact seat count shown in the graph occurring are fantastically low. But the chances of a narrow result that provides no clear coalition government are around 30%. This is significantly less than the 50% estimated chance of Labour being able to form a government on their own or with the LibDems.