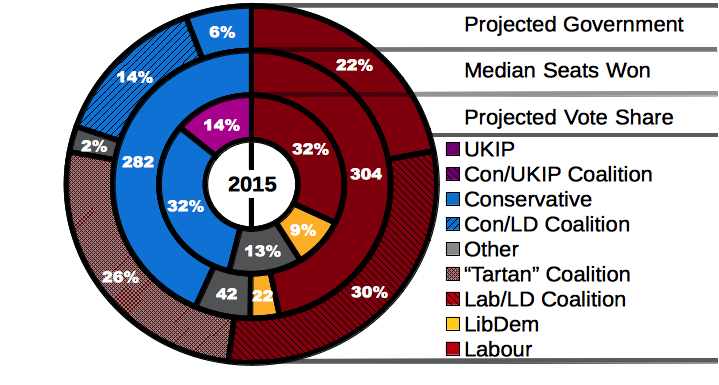 Slight increase to the Conservative chances, but still less chance of the Conservatives getting any kind of return to No.10 than of an outright Labour majority. The SNP have re-stabalised after a slight cooling off, and the "most likely" government to form is still a Lab-LibDem coalition. Labour's combined chance to by in government after the next election sits at over one in four simulations.

There was some talk about the "Conservative tactical masterstroke" of getting the Greens into the debates, and the headlines, as a way to undermine Labour's vote share. However, this hasn't quite manifested as expected, with only moderate gains being made by the Greens, and some polls not showing any gains. Further those gains seem to come from UKIP and 'others', not Labour.

This suggests that UKIP have been absorbing the "anti-establishment protest vote", which has already been quite high. So increased publicity and salience for the Greens simply provides them a greater share of this already priced in protest vote.
Originally posted here http://ukelectiontrend.blogspot.co.uk/
at 22:09