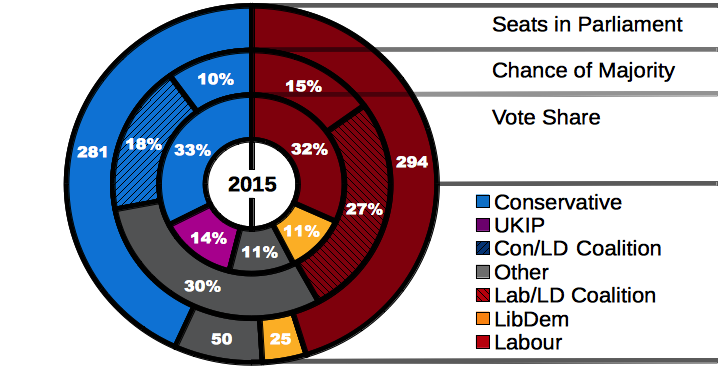 Which party benefits the most from a five-party contested election? According to the model, it's actually the Liberal Democrats, who have consistently been highly rated to remain in government as a coalition partner despite losing a lot of seats.

This is due to the Liberal Democrats having some high concentration seats that they can defend even with huge losses nationally. Which raises the question to what UKIP's density distribution will be? The model uses 2010's distribution, which is practically even across the country, and so puts them at a huge disadvantage to the other parties that concentrate their voters into geographic regions. UKIP has to get a large swing to pick up any seats, of course if they did it'd be a wave of seats being won by them. That's very unlikely, and the model doesn't think they'll win any seats except for the handful of weird edge cases.

But that's just based on an assumption that the 2010 distribution will carry over to 2015. Which may or may not be true as UKIP pick up more votes. The distribution of 3% may well be quite different to the distribution of 14%, and other projections try to assign a non-uniform regional distribution. But there's a major problem with doing that; there's little data to use to generate that distribution. The most recent remotely comparable election was the European elections. However, that merely showed that UKIP was approximately evenly distributed across most of England excluding London and the North East. Combined with the EU elections being very low turn-out and tilted towards protest votes, this makes it a low value data-point. So really, there's just no way to know how a UKIP Vote of around 14% would be distributed across the country.

Change log for bug-fixes to the model. The random distribution in the simulation is now being shaped to match the way recent polling's distribution is skewed. The standard distribution of the random simulations have been reduced a bit to match a higher average sample size of polling than had been assumed. This reduces Labour and Conservative chances of a majority. Hopefully this is the last change to the mechanics of the model. The model has now been run on back-dated data to populate the history page.